Often there is a need for quick field measurement of gas condensate concentration in produced water, such as when performing process optimization, water treatment verification and routine process monitoring.

Rigorous laboratory analysis methods such as gravimetric oil and grease measurements or gas chromatographic methods are not sufficiently sensitive to process changes and/or do not provide the required quick turnaround. Various quick analysis methods with different measurement technologies are available, but one needs to understand the methods and technologies when making a choice of an appropriate measurement method.

Field measurement of gas condensates in produced water can be achieved by UV fluorescent technologies, with minimal interference from other chemicals that might be present.

Around the globe many methods with reasonable performance expectations exist for measuring dark crude oil concentration in produced water. These methods are effective in catching upsets and optimize system performance.

However, most methods have reduced sensitivities to light crude oils or gas condensates due to high fractions of BTEX, highly water-soluble hydrocarbons with no significant colour.

Two of the most common laboratory methods are the EPA 1664A gravimetric and OSPAR ISO 9377-2. These methods have detailed procedures that must be performed in controlled conditions. Local governments often require oil field operators to use one of these methods for reporting hydrocarbons in discharge water. 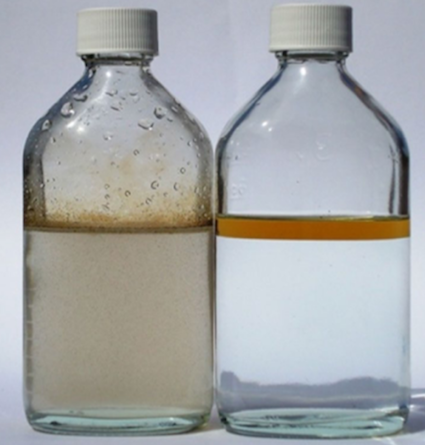 When oil field operators want to monitor the performance of their water treatment system, they have the choice to use the regulatory method or a field method. The field methods are generally faster and easier to perform and cannot be used for reporting to the government. The common field method technologies include infrared (IR) and ultraviolet (UV) fluorescence.

Depending on the method used, the solvent can be either lighter or heavier than water. The volume of solvent is usually 1/10 of the water volume, making the extracted oil concentration 10 times higher. Once the concentration is analyzed, the oil in water concentration can be calculated with this ratio.

The result of the EPA 1664A method is the weight in milligrams of the residue per liter of water that is left behind after evaporating the extracted hexane. The result is called Hexane Extractable Material, or HEM.

The EPA 1664A method is sensitive to oil that is soluble in hexane and does not evaporate. The results will tend to be low when a light gas condensate is analyzed due to the evaporation step. If the gas condensate is light enough, there may be no significant measurement. Likewise, if a highly asphaltenic oil is analyzed, the results can be low due to the low solubility of the asphaltenes in hexane.

By definition, the minimum reportable concentration for this method is 5.0 mg/l. Due to the numerous steps involved with analyzing the water samples for crude oil, an accredited laboratory using this method has an allowable error of approximately 20 per cent for produced water analysis.

The OSPAR ISO 9377-2 method reports concentrations of hydrocarbon components that are extractable in pentane, not absorbed by Fluorosil, giving GC-FID response from heptane (C7) to tetracontane (C40) less the TEX response. This is a rather complex result that is difficult to perform in the field. It is best performed in well-controlled laboratory conditions.

The OSPAR method will only detect non-polar / dispersed oils due to the Fluorosil step. Light gas condensates with a high BTEX concentration will have low results due to the removal of the TEX response and exclusive consideration of C7s and higher. There are no published reporting limits for this method.

When samples are analyzed, the results are often referred to as total oil and gas (TOG) or total petroleum hydrocarbons. Each method used, will produce a slightly different result.

Total petroleum hydrocarbons (TPH) are the result of the OSPAR method. TPH is also referred to as the result of the EPA 1664A method after silica gel has been added to the hexane extract to absorb polar organic molecules. However, the TPH result from the OSPAR and EPA methods will not be the same result.

Water Soluble Organics (WSOs) are the polar organics dissolved in the water. The WSOs are not removed from the water by traditional gravity separators, and the concentrations are usually stable. WSOs can be extracted by a solvent if the pH of the water is reduced below 2.0 before extraction.

Infrared analysis will measure the concentration of hydrocarbons by detecting the carbon to hydrogen bonds in a sample. This method can correlate well with laboratory methods. Two methods can be used to prepare a sample: one for hydrocarbon solvents, the other for costly chlorinated and fluorinated solvent.

Most oil and gas companies prefer to use a hydrocarbon-based solvent because it is easy to dispose. The solvent and water samples can be added to the slop water treatment system, where the solvent will be captured and transported with the recovered oil. A chlorinated solvent must be stored in a liquid waste container and be disposed as a hazardous waste.

Infrared analysis measures all hydrocarbons in a sample, so when using a hydrocarbon solvent all the solvent must be removed before analysis. The common method for removal is evaporation. During the evaporation procedure some of the target oil will also evaporate. Lighter oils and gas condensates will evaporate quickly, leaving little or none for measurement. For this reason, infrared will have low sensitivity to light gas condensates.

Measurement of a sample in a chlorinated solvent is simple, with the extracted solvent being added to a cuvette then placed in the measurement chamber for analysis. This method will have sufficient sensitivity to light gas condensates in water for process control.

Some water treatment chemicals will produce interference because they are hydrocarbon-based chemicals.

Ultraviolet fluorescence technology is ideal for field sample analysis of oil in water concentration. With a deep UV light source, crude oil and natural gas condensate can be measured below one ppm and up through 5,000 ppm in some cases.

For this technology, an ultraviolet light source is used. Oil and gas condensates will absorb the UV light and immediately emit a longer wavelength of light. The intensity of this emitted light is linear with the oil concentration and measured by a sensitive light detector. Solid particles (iron sulfide, sand and rust), gas bubbles and most water treatment chemicals will not produce the fluoresced light and do not cause any significant measurement error.

In the photo, a water sample with a fluorescent dye is exposed to a light blue light. Similar to oil, the dye is absorbing the blue light and emitting green. The intensity of the green light is linear with the dye concentration. Because fluorescence monitors operate in the UV wavelengths, a surrogate dye is needed for demonstration in the photograph. 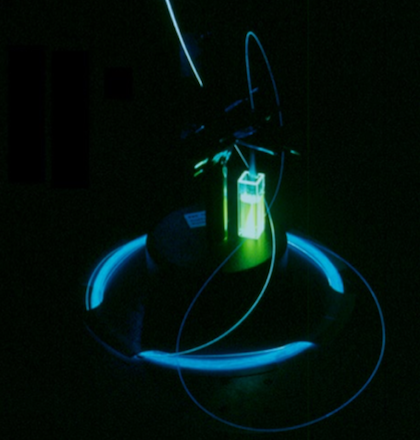 The advantages of UV fluorescence when compared to UV absorption, IR and visible light absorption (turbidity) are that fluorescence is sensitive to oils at significantly lower concentrations, and can detect free and soluble oils.

When calibrated to the oil in the process, the analyzer will respond to the aromatic content of the oil, with the calibrated result being the total oil concentration in the water. Crude oil and natural gas condensates typically have a stable mixture of hydrocarbons over a six-month period, such that frequent calibration is not necessary. Because the fluorescence response is linear with concentration, the measurement will correlate well with the 1664A and OSPAR laboratory methods.

UV fluorescence technology has an additional advantage in that the light source wavelengths and detection wavelengths can be selected to reduce the interference from water treatment chemicals and natural organics. Also, UV fluorescence sample analysis is compatible with all commonly use extraction solvents and a surfactant-based method is available. With the same sample analyzer, hydrocarbon and chlorinated solvents as well as the surfactant method can be used. In fact, when using the correct wavelengths, an aromatic solvent such as xylene and toluene can be used for heavy oil analysis.

The sample can also be manipulated to learn more about the nature of the hydrocarbons in the water. To include water soluble organics in the analysis, a strong acid is added to the water sample which allows the solvent to extract the soluble organics. Without the acid addition, the result is the free oil concentration. Additionally, a microporous filter can be used to remove oil droplets so the measurement is only emulsified oils. The size of the filter can be chosen to define the particle size of an emulsified droplet.

To confirm the measurement capabilities, the TD-560 Oil in Water Analyzer was tested for the limit of quantification (LOQ) of various oils, fuels, etc. For this test, the target oil and hexane were mixed in known concentrations, and then tested for fluorescence response. The minimum quantifiable concentration was calculated based on this response. The samples were then diluted accordingly and tested to validate the quantification limit.

The TD-560 was determined to have a good response to light gas condensates, refined hydrocarbons and pure toluene, ethylbenzene and xylene at concentrations below 1 ppm.

A study was performed to prove the measurement effectiveness of the UV fluorescence technology for light hydrocarbons in a dirty well water process. This study involved a large sample of recovered refined hydrocarbons and well water from a refinery ground water remediation site. Two sample preparation procedures for a sample analyzer, an online fluorescence monitor and the EPA 1664A method, were used to measure the hydrocarbon concentrations in prepared samples.

The analysis of the samples shows that all four methods produce linear results. These linear results prove that the different methods can be correlated to each other, proving the fluorescence technology is appropriate for measuring the process.

In this study, the target oil was an aged refined fuel mixture (gasoline and diesel). The EPA 1664A results had a significantly lower slope than the fluorescence response. Because the target is a light refined product, most of the hydrocarbons evaporated during the 1664A evaporation step, resulting in a low response. Light gas condensates from a gas production field will evaporate similarly to the refined fuels and also produce low to no measurement for gravimetric and infrared analysis with hydrocarbon solvents. 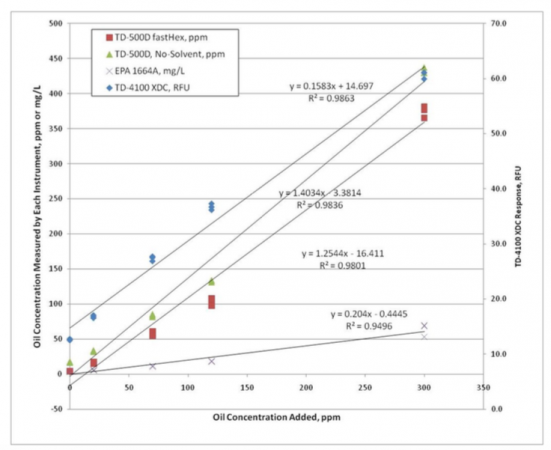 UV fluorescence sample analyzers with a deep ultraviolet light source have the needed sensitivity, fast preparation procedures and ease of use for measurement of light natural gas condensates in produced water. UV fluorescence’s compatibility with all commonly used extraction solvents and multiple preparation procedures available allows field operators to choose the method that is best suited to their operations.

The linear response of UV fluorescence to oil concentration in water produces good correlation to laboratory methods used for regulatory reporting. When quick field analysis of oil, light condensates or refined fuels is needed, UV fluorescence is the leading technology that operators can use to control their process with confidence.