Sulfur is a resource so versatile it can be used to make rubber, paint, insecticides – even medicine. Getting this commodity from Alberta where it’s a major byproduct of the region’s oil-sands mines, to markets around the globe is no small operation.

Railcars must travel hundreds of kilometres and pass through the Rocky Mountains before the sulfur can be loaded onto ships bound for China and elsewhere.

One major player involved in this sizable logistics effort is Pacific Coast Terminals (PCT). The company’s shipping terminals near Vancouver, B.C., receive more than 36,000 railcars of sulfur in an average year. PCT also handles hundreds of thousands of tons of ethylene glycol and canola oil on an annual basis.

Recently, PCT added a new dry bulk commodity to its operation: potash, a potassium-rich salt mined from underground deposits. Potash is produced in three grades – industrial, which is white in colour, and granular and standard, which are both pink. The two colours of potash cannot come into contact with each other.

“Adding a new commodity to our operation presented us with the challenge of keeping the elements separate without hurting our productivity,” said Rod Kenyon, maintenance manager, PCT.

Adding to the Mix

The process of transporting a dry bulk product like sulfur from a railcar to a shipping vessel involves several steps. When the sulfur first arrives by railcar to PCT, it’s moved into a storage bin until its ship arrives. It’s then taken to the ship loader and transported from the storage bin onto the vessel through hatch covers. 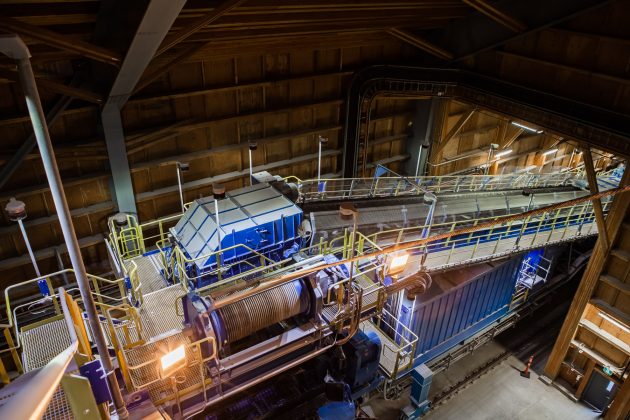 Rockwell has been working with Pacific Coast Terminals in Port Moody, B.C., to expand its efficiencies and capability with remote ship loading. 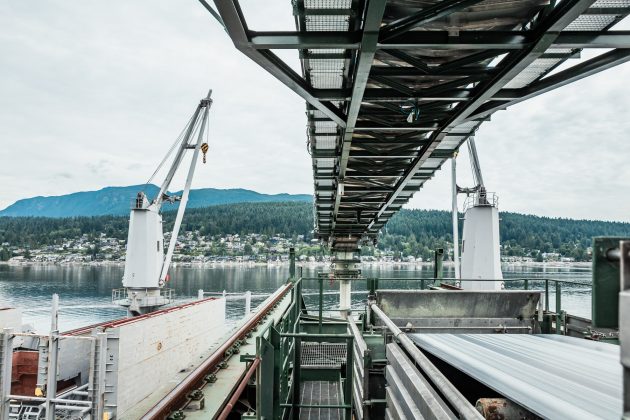 PCT’s ship loader, originally built in 1998, is a large machine anchored to a berth, a designated location for stationary vessels that can facilitate the loading or unloading of raw product. To transport the sulfur onto a ship, the ship loader’s extended arm (boom) pivots, rotates and sweeps across the vessel to ensure that weight is distributed accurately and evenly. This process is controlled by an operator in a cab at the end of the boom.

Sulfur is delivered through the vessel’s hatches straight down a chute connected to the boom. But for potash, a cascade chute is required to slow down the process to avoid damaging the potash. This chute consists of a series of cones and funnels that zigzag down a funnel.

“We needed to upgrade our ship-loading process and technology to be able to quickly change between the sulfur and potash chutes,” Kenyon said. “We also needed to prevent cross contamination between the two types of potash when loading a vessel.”

One major challenge the company faced as it looked at these updates involved the operator cab. There was no way to efficiently change between the sulfur and potash chutes because the cab was physically in the way.

PCT set out to find a solution that would remove the cab from the boom and, instead, allow operators to control and monitor the process remotely. If the company pulled it off, it would be a first for ship loading in North America.

From Cab to Control Room

PCT started to investigate options for making the chutes interchangeable and moving the operator from the cab to the control room. To help with the design and implementation, the company turned to Rockwell Automation and enCompass Solutions Group, a Rockwell Automation Recognized System Integrator in the PartnerNetwork program.

Working together, the team determined the best solution for the chutes was to make the head of the conveyer, or head box, interchangeable. This would allow for easier transition and less cleaning when changing between products, and the entire process of removing, cleaning and replacing the chute would take only 30 minutes.

The larger challenge was moving the operator into the control room. Operators needed to be able to see around the vessel to prevent moving machine parts from colliding with various objects on the ship – something they could watch for from the cab. Operators also needed a view into the vessel to know the ship loader’s limits and where the chute hangs inside the hatch to avoid colliding with the sides of the opening.

With help from the operators, PCT added multiple camera views to the ship-loading environment to replicate in-cab views from the control room.

Already standardized on an Allen-Bradly ControlLogix control system from Rockwell Automation, PCT implemented radar sensors that interface with the controllers and tie into EtherNet/IP. The sensors provide anti-collision detection outside of the vessel, along with a view inside the hatch when loading product.

The sensors also connect to FactoryTalk View software from Rockwell Automation to relay information to operators. For example, operators can view anti-collision zones to monitor and troubleshoot issues during the ship-loading process. Management also has a view into the process and now knows when a ship is being loaded, the loading rate and which specific hatches are being loaded.

Operations in from the Cold

With the old system, an operator would sit in the ship-loader cab for a continuous four hours until they were relieved by another operator. Operators also needed to walk the series of stairs to and from the cab, even during adverse weather conditions. And they were at risk for potential machinery collisions when sitting in the cab.

“Now, with remote capabilities, our operators can move from one hatch to another, avoiding collisions with confidence, from the comfort and safety of the control room,” Kenyon said.

PCT has experienced greater loading efficiencies. By removing the operator cab at the end of the boom, the weight of the ship loader decreased, allowing PCT to load more product, faster.

For example, operators could load 5,000 tons of sulfur with the old system. Now they can safely load 6,500 tons. PCT also has reduced the time it takes to load a vessel. Loading 5,000 tons could take up to two hours, and it now takes only one hour. In some instances, an entire eight-hour shift has been eliminated due to the efficiencies gained with the new ship-loader structure and process.

The new operation has also gained more reliable data. Machine and ship position data, along with the volume of cargo, need to be logged and made available to the client. PCT would traditionally have someone on the vessel manually measure and gather this information. Now, the radar sensors automatically capture and deliver this information to operators and management.

“The benefits we’ve seen with this solution, both for our operation and our operators, have been incredible,” Kenyon said. “Our next step in this automation journey is toward automated hatch changes.”