Self-calibrating temperature probes prove their worth in the field

As with any game-changing new technology, when Endress+Hauser unveiled the hygienic, compact iTHERM TrustSens – the world’s first self-calibrating RTD temperature sensor – there was a great deal of interest in how it would perform in everyday use.

Is it as good as it sounds? It is reliable? Is it as accurate as conventional RTD probes? Is it a cost-effective alternative for the food+beverage and pharmaceutical production? Are there other benefits? Four years later, early adopters are reporting back, and the answers are yes across the board. 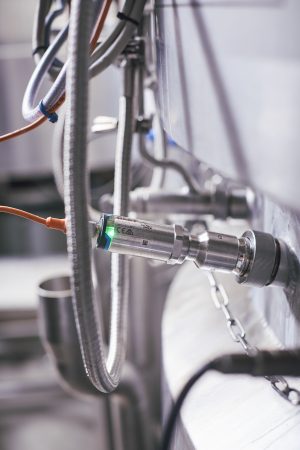 The technology is extremely accurate and highly reliable. In performing self-calibration, the TrustSens dispenses with the eternal struggle of identifying the optimal calibration interval, where too short may be the low-risk approach but means wasted effort and expense, and too long saves money but heightens the risks of temperature drift, contamination and even embarrassing recalls. Automated self-calibration represents a material enhancement.

Tarang Patel, Product Manager, Level Temperature & Pressure at Endress+Hauser Canada explains: “Let’s say you’ve got stable measurements that are unlikely to drift. If you are tied to a fixed schedule for manually calibrating the instrument, at some point you may inadvertently take it out of calibration. Fixed scheduling often employs a very conservative calibration interval to be on the safe side. Adhering to it will, at the very least, entail some unnecessary expense (mainly manual labour and process downtime). It also creates a non-zero risk of damaging a device that was working perfectly fine. Instruments that auto-calibrate in place perform more frequent calibrations, so accuracy is assured, but do so without the unique costs and potential risks of a manual calibration event.”

TrustSens can be an enhancement over any manually calibrated RTD sensor, but provides the greatest economic benefit when performing in-situ, auto-calibration where process temperatures regularly exceed 118°C or in equipment that undergoes SIP (Sterilize in Place) on a regular basis. For example, in the case of SIP, as steam is introduced into the process, the temperature passes through the 118°C threshold that triggers an automatic inline calibration and reports any deviations to the control system using the HART protocol. (Operators whose process never reaches that 118°C threshold can induce the self-calibration process using an external heat source. It still saves time and money.) The benefits of the TrustSens inline self-calibration include early detection of temperature drift, straightforward visual monitoring of success by LED, short calibration intervals that reduce the risk of incorrect temperature measurements, and safety and ease of handling with little or no production downtime. And the iTHERM TrustSens is FDA 21 CFR Part 11 compliant.

Here are some reports from early adopters who have incorporated TrustSens probes into their operations and compared it with the performance and calibration support required of their manually calibrated standard RTD (Resistance Temperature Detector) probes.

Standard practice in medical autoclave operation is to monitor the temperature in the coldest part of the process by placing a sensor instrument in the drain or near the bottom of steam sterilization equipment. As measuring instruments are inevitably subject to aging-induced drift phenomena or mechanical damage, periodic recalibration is necessary to guarantee reliable process monitoring. Should an instrument fail, there is no reliable way to quickly pinpoint the timespan and batch(es) affected in between calibration cycles, triggering a lengthy and costly troubleshooting process.

GMP rules do not prescribe specific calibration intervals; The frequency typically ranges from 6-12 months and is usually defined by company-specific SOPs. However, this involves process stoppage, manual intervention, instrument removal and associated risks such as mechanical damage. This Endress+Hauser customer, one of the biggest names in global pharmaceuticals, wanted a new approach for its operations at a sterile facility in Germany: replacing the manual calibration function by automatic in-situ recalibration between each batch (ie. each time goods are loaded/unloaded). In the case of the steam sterilizer, the 118°C calibration point of the TrustSens is very close to the autoclave sterilization temperature of 123°C. The automatic calibration was therefore performed within the range of the desired sterilization process parameters.

On an annualized basis, that would lead to more than 1,100 calibrations, not including the manual standard calibration completed periodically as per the customer’s SOP. The study showed overall process control was increased. From a cost perspective, it was determined that the return on investment would be reached after approximately 1.5 years, assuming all standard temperature sensors are replaced with TrustSens sensors.

A regional brewery in North Carolina has over 100 standard RTD sensors in its operations. The brewery uses a combination of portable micro-baths and other calibrators to perform manual calibrations.  Micro-bath calibrations use hot oil and an ITS-90 traceable reference thermometer. Each time the micro-bath is moved to a new location, the oil has to be heated to the appropriate temperature and allowed to stabilize prior to performing a single point calibration. The process takes the tech team around 45 minutes per thermometer. There is also a safety consideration, as transporting a hot oil micro-bath from sensor to sensor is hazardous if not done properly. With each calibration, production is stopped, then has to be brought back online carefully.

The brewery purchased a TrustSens thermometer for a trial to determine the time and cost savings and risk reduction it could provide. The brewery does not employ SIP, rather it uses a simple portable ceramic block heater in conjunction with TrustSens technology to perform single point calibration. The technicians remove the temperature probe from its thermowell and place it in the ceramic block heater. Once the temperature in the RTD exceeds 118°C, the sensor begins to cool and auto-initiates the recalibration cycle. The brewery tested the self-calibrating thermometer side-by-side with one of its conventional RTDs. Using the ceramic block heater, self-calibration of a TrustSens takes no more than 15 minutes, or about 30 minutes less per standard RTD. If the TrustSens is within the brewery’s self-defined accuracy tolerance, a green light appears. The probe is re-inserted into the thermowell.

Replacing the standard RTDs with iTHERM TrustSens would save 80-plus hours of person-labour per year considering some sensors are calibrated annually and some twice a year. It would dispense with the hot oil bath and the inherent safety risk.

A well-known global manufacturer of vaccines and other pharmaceutical products wanted to cut down on production downtime while automating calibration to minimize the risks in bioproduction. The iTHERM TrustSens was installed in thermowells in a buffer tank inside a pilot plant fermenter as well as in the fermenter itself. The TrustSens sensor was used for test purposes over a period of four months. The average deviation proved to be only 0.03°C, which is 10 times better than the maximum permitted error at 120°C of a conventional Pt100 class AA sensor, proving the TrustSens’ accuracy and reliability.

Such performance earned kudos from the customer. It noted the probe’s capability for early detection of temperature deviations assures early fault detection. Short calibration intervals reduce the risk of incorrect temperature measurements, which is vital in such bioprocesses. It also provides traceable storage of the last 350 calibrations. Easy installation and straightforward commissioning meant the TrustSens would save the customer a great deal of time and money in installation, maintenance and monitoring.

Another benefit of TrustSens is facilitating SOP and regulatory compliance. When employing the TrustSens temperature transmitter with Heartbeat Technology™, calibration results are captured after every successful self-calibration. When technicians need the calibration history, they connect to the transmitter via a laptop, or download the data from the control system. Printable calibration certificates can also be produced via TrustSens’ DTM in preparation for audits. The TrustSens probe eliminates the risk of undetected non-conformance issues without impacting existing, validated procedures or GMP.

Or for a deeper dive into how the iTHERM TrustSens works, watch this video: