A new research study from Flow Research, Volume X: The World Market for Flowmeters, 7th Edition, finds that the worldwide flowmeter market totalled $7.06 billion in 2018 and is projected to approach $8.85 billion by 2023.

The worldwide flowmeter market size has followed the upward and downward fluctuations in oil prices. When oil prices began dropping five years ago and many oil and gas exploration projects were postponed or cancelled, associated instrumentation industries experienced a ripple effect.

“It’s an exciting time for the world flowmeter market. Oil prices have stabilized and projects requiring new flowmeters are in full swing,” says Dr. Jess Yoder, president of Flow Research. “Adding to that, suppliers are introducing new product features that are revitalizing the market. Chief among these are enhanced accuracy, reliability, and redundancy.”

This downturn especially impacted the Coriolis, ultrasonic, differential pressure, positive displacement, and turbine flowmeter markets.  In 2015, for the first time in many years, new-technology flowmeter markets showed a decline. The only exception was a small revenue increase for magnetic flowmeters, which cannot measure the flow of hydrocarbons and therefore are not widely used in the oil & gas industry.

Fortunately, in February 2016, oil prices began recovering and the worldwide flowmeter market is now back on a healthy upward track.  Coriolis and ultrasonic flowmeters, which are industry-approved for custody transfer of both gas and liquids, are projected to experience the fastest growth rates over the next four years.

“Last year was a banner year for the flowmeter market, and this trend is continuing into 2019,” says Dr. Yoder. “There is also a burst of merger and acquisition activity that is almost certain to continue as companies position themselves to compete more effectively in an expanding market.” 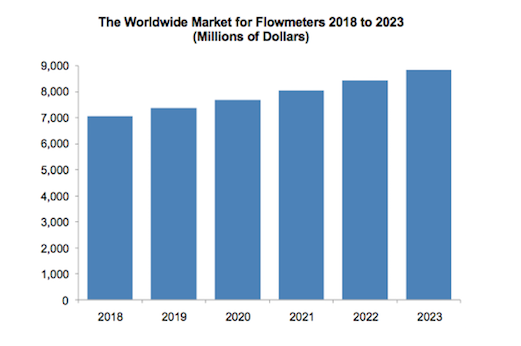 As some new-technology flowmeters become more familiar, gain industry approvals, come down in price, and expand the range of line sizes available, their advantages are gaining them converts. Some advantages include: accuracy, repeatability, reliability, lack of moving parts subject to wear, and low to no pressure drop. A steady stream of new features, options, and apps increases their ease of use and integration into processes.  Some new-technology flowmeters are also benefitting from expanding and newer applications such as hydrofracking and environmental monitoring.

Traditional technology flowmeters, especially DP flow, positive displacement and turbine meters, have the advantage of a large installed base that is reluctant to switch without cause. In addition, they were among the first types of flowmeters to receive approvals from industry associations for custody transfer applications. In many applications, these are the lower-cost workhorses of the flow measurement world. However, the need for increased accuracy, reliability, and managed network capabilities are causing some users to make the switch to new-technology meters.

In addition to growth factors related to the oil and gas industry, product improvements in both new and traditional technology flowmeters are contributing to the upward trend in the worldwide market. Some product improvements include modern materials for meter parts or liners, additional line sizes, increased accuracy, and broader flow ranges. Suppliers are also making battery powered units, smaller meter bodies for tight spaces, multivariable meters, and self-monitoring or self-recalibrating meters.

Regulatory reporting requirements and the need for continuous measurement without interruption are increasing the value of redundancy in measurement. Vortex and turbine suppliers have brought out flowmeters with two sensors, and dual flowmeters calibrated together. New differential pressure flowmeters offer fully integrated orifice plates with multiple transmitters. Dual turbine rotor designs offer greater turndown flow range along with enhanced accuracy. Redundancy is rapidly taking its place along with accuracy and reliability as a key feature to look for when selecting a flowmeter.