The Fort Hills project was recognized with an Award of Merit in the Power/Industrial category at the annual Global Best Projects competition recently, honouring construction and design excellence.

The award, sponsored by the Engineering News Record, evaluates safety, innovation, community contributions, aesthetic quality and workmanship, with a special emphasis on the global diversity of the project team.

“Being considered and then recognized for our performance on this project really shows what we can accomplish as a company,” says Darryl Metz, vice president of in situ and downstream projects. “To be part of this – it had to be done globally, you don’t qualify otherwise.” 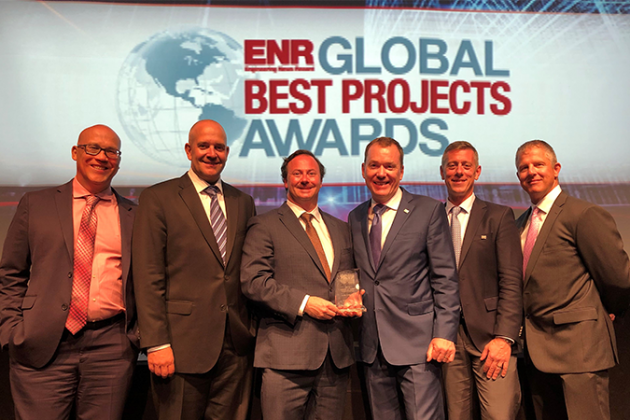 When referring to the qualification of it being done “globally,” Metz is refering to the 25,000 people from around the world, who were suppliers and contractors on the project, from areas of the globe that included South Korea, India, Philippines, China, and Spain.

The Fort Hills project produces some of the world’s lowest carbon intensity oil sands supply and is the first project that met and exceeded its design capacity within weeks of startup.

Intense construction in the energy sector at the time the project began was straining North American engineering and construction resources. The situation was especially challenging in Alberta, where large energy projects and a major fabrication backlog were being managed by just a few qualified firms. All this meant the Suncor project team had to be creative and think differently about how best to move the project forward.

Suncor’s general manager of construction and field technical Ryan Jackson, who was among those accepting the award, reflected how it underscores Suncor’s ability to competitively execute large oil sands projects to a global standard.

“This award recognizes the integration across all levels; various groups of employees and contracting partners, locally, nationally and internationally, that all came together to get it done,” says Jackson, “and it celebrates the huge effort and complexity of interaction between all these groups, and of what Suncor can do safely and collaboratively.”

Jackson says that he looks forward to applying many of the learnings from Fort Hills to other projects.

“It took years to really understand how to successfully integrate and scale up our resource requirements of this venture – in fact some of the key learnings weren’t discovered until the project was nearly complete. Having the opportunity to apply these ideas to other projects earlier will improve future results.”