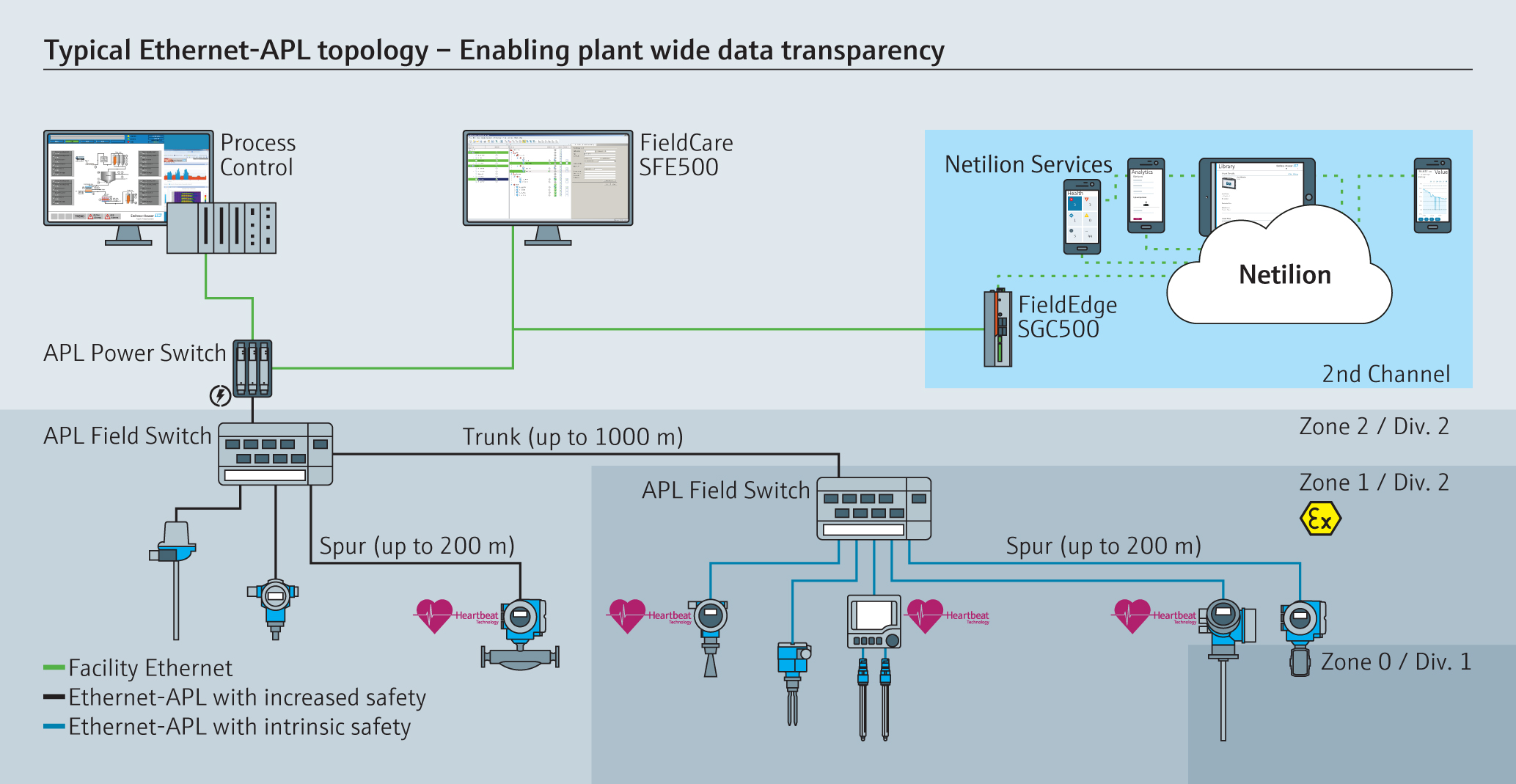 For process companies, 2021 promises to be pivotal, and not just because COVID-19 vaccines could help the world return to a semblance of normalcy. It will mark the debut of Ethernet-APL, a game-changing data networking protocol with the potential to boost operational efficiency and productivity.

For all, it will present new opportunities to improve energy efficiency and maximize output by enabling advanced preventive or predictive maintenance approaches informed by smart IIoT analysis.

Implementing Ethernet-APL, part of a larger two-wire Ethernet revolution about to sweep industry, will effectively end the separation of the OT and IT networks in a facility. In so doing, it dispenses with costly translators required to exchange data between the operational and administrative/management realms today.

A plant can have a single, integrated, high-speed Ethernet backbone from the field level to the cloud, connected to every device, every software system, every department. Such a network can monitor more process variables with increased measurement accuracy compared to 4-20 mA current loop control signalling.

Conventional four- and eight-wire Ethernet has achieved only limited penetration of field level process measurement devices, partly because of the requirements of intrinsically safe operations as defined by IEC TS 60079-47, partly because of its limited range (100 metres) and partly because its wiring is bulkier and more expensive. That also makes it suboptimal for adding the many low-power analytical and monitoring tools like sensors, vision systems and actuators that are needed to transform field level operations into a true IIoT environment.

Two-wire Ethernet, as adapted to the needs of process applications, overcomes these issues and more. Ethernet-APL incorporates the new 10BASE-T1L global transmission standard (IEEE 802.3cg-2019) for Ethernet over a single shielded pair of twisted copper wire. It delivers exponentially greater data speeds to field devices than established field level protocols. 10BASE-T1L supports full duplex, 10 Mbps data transmission, which is more than 300x faster than fieldbus and 10,000x faster than HART, and has a range of 1,000 metres. Ethernet-APL also includes a technical specification called the Two-Wire Intrinsically Safe Ethernet (2-WISE) standardized in IEC TS60079-47 to fulfill the requirement of intrinsic safety for loop-powered and separately powered devices in hazardous areas up to Zone 0, 1 and 2/Division 1 and 2.

Employing trunk-and-spur power topologies similar to fieldbus, Ethernet-APL provides for up to 60W transmission on trunk segments. Then, that power is stepped down via power and field switches to supply each end node, including those in Ex Zone 0. Port profiles have been created for multiple power levels with or without explosion hazardous area protection. In the case of the former, Ethernet-APL will still deliver significantly more power per node than fieldbus or 4-20 mA with HART; the latter provides only <40 mA per node in Ex Zone 0. That increased power delivery via Ethernet will make it possible to connect many low-power IIoT smart devices without the need for a separate power source. The possible topologies also include redundancy concepts above the Ethernet-APL physical layer to ensure flexibility according to the needs of a process plant.

Additionally, the actual analytical or measurement technologies in Ethernet-APL devices from Endress+Hauser and others do not change; The process data they provide is the same as the equivalent fieldbus model.

The development of Ethernet-APL technology under “The APL Project” was established in 2018 and is backed by the leading industry standard development organizations (SDOs) FieldComm Group, ODVA, OPC Foundation, and PROFIBUS & PROFINET International, Endress+Hauser and many other leading process automation suppliers.

The specifications for Ethernet-APL are about to be finalized, with first infrastructure components and field devices expected shortly thereafter. A first reveal of some hardware is expected at the virtual ACHEMA 2021 event in June.

Endress+Hauser will continue its Industrial Ethernet journey by building an Ethernet-APL portfolio for all relevant measuring principles: flow, level, pressure, temperature and analysis. With most leading process automation players collectively supporting the development of Ethernet-APL, its adoption over time promises to be irresistible. (That said, customers can count on equipment connected via legacy protocols being supported indefinitely.) The momentum for two-wire Ethernet is being further energized by the parallel development on the factory automation side of Industrial SPE, which uses 10BASE-T1L as well as other, faster, shorter-range transmission protocols. Altogether, this assures a near universal emphasis in industry on implementing field-to-cloud Ethernet and a robust competitive marketplace of standardized products from trusted vendors like Endress+Hauser.