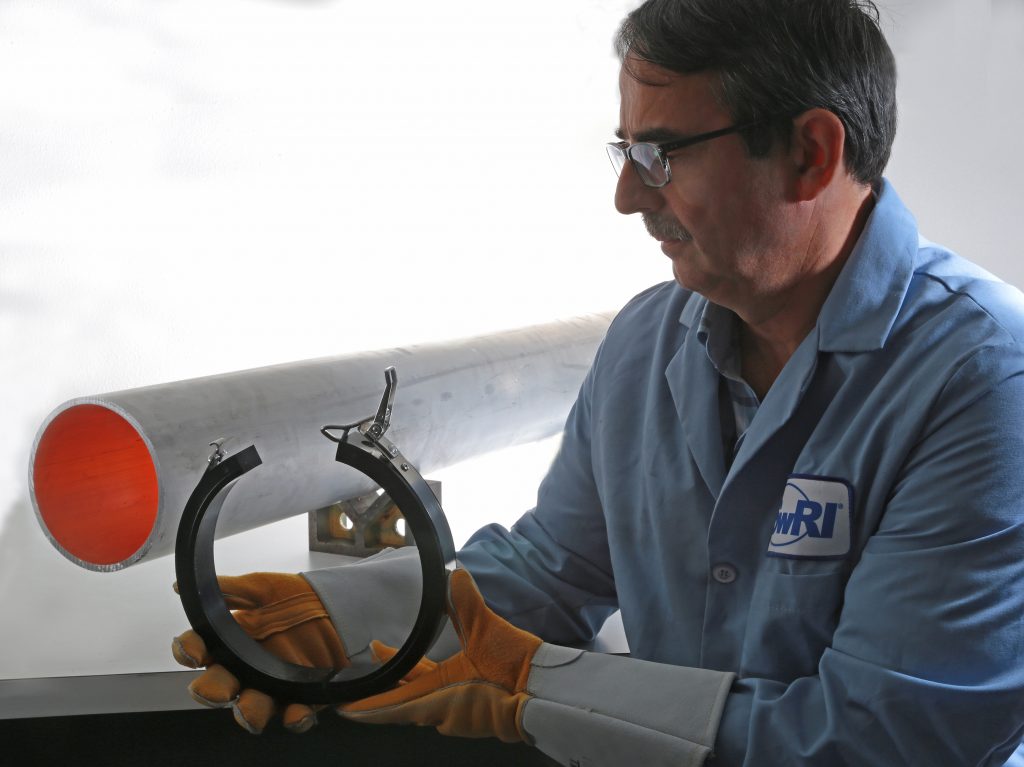 “The MsT system offers the next level of signal strength. This user-friendly technology more precisely locates structural issues,” said Dr. Sergey Vinogradov, an SwRI staff engineer who led the initiative to improve the sensor. “It is an extremely reliable, state-of-the-art, durable sensor that you can install just about anywhere from subsea to open space.”

The circular, hard-shell MsT sensor clamps around pipes and other structures and is available in circumferences ranging from one-half inch to 70 inches. It detects material flaws, corrosion and areas at risk of developing cracks and leaks. At just 1.1 inches wide, MsT uses less shear-wave couplant, a gel that aids energy transmission, and requires less clamping force when dry coupled, meaning when no couplant is used.

The MsT sensor can be permanently installed on a structure to provide ongoing monitoring. A battery-operated hub collects and wirelessly transmits data from the sensor and can connect to multiple sensors at once. The hub can be programmed to change the sensors’ frequencies automatically to meet industry safety standards, which require a structure be tested using at least two frequencies.

“The MsT is compact and easy to install, but it’s also more convenient. With this improved sensor, the operator does not change hardware to change frequencies. And this function is automated, which reduces human error,” Vinogradov said. “This feature is especially useful when the sensors need to be installed at multiple, hard-to-access locations daily.”

High temperatures accelerate corrosion in metal structures. For that reason, MsTis designed to withstand up to 500 degrees Celsius (932 F). It can be installed on extremely hot structures to detect weaknesses and can also withstand temperatures significantly below freezing.

Additionally, the sensor can now scan a structure in segments, providing more thorough inspections. MsT has also made the time-consuming task of shifting from transversal to longitudinal guided waves easier with the flip of a built-in switch. Longitudinal waves are ideal for buried pipes, while transversal waves are better for inspecting structures filled with fluids.

This past spring, the American Society for Nondestructive Testing (ASNT) presented Vinogradov with the 2018 Research Recognition for Innovation Award for the MsT sensor. The award recognizes highly distinguished breakthroughs in nondestructive evaluation and testing research.

Vinogradov and his team are showcasing the MsT sensor at the ASNT Annual Meeting, Oct. 28-30, at booth 932 at the George R. Brown Convention Center in Houston, Texas.