Is hydrogen still the fuel of the future?

The first consumer hydrogen fuel cell electric vehicle (FCEV), Honda’s FCX Clarity, was only available through leasing and only in California and Japan in 2008. Since then, electric vehicles powered by that technology have kept a low profile; but now several automakers, including Toyota and Hyundai, are now offering FCEVs through leasing and for sale in B.C. and Quebec. 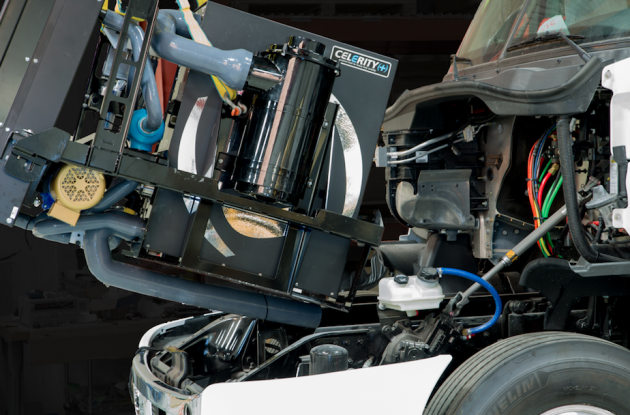 Hydrogen is the fuel which helps power the fuel cells for FCEVs but it’s really only one of many applications for what is the most commonly occurring element in nature.

Canada is considered a global leader in the hydrogen generation sector and has one of the largest concentrations of hydrogen product and services development in the world.

Hydrogenics Corp. is one of the pioneers in developing the processes used for those industrial applications as well as for fuel cell technology for transportation. Co-founded by former chairman and CEO, Pierre Rivard in 1990, Hydrogenics supplies industrial hydrogen generators and hydrogen energy storage systems, along with fuel cell power systems worldwide.

“European governments have agreed upon the target of reducing emissions in Europe by 80 percent by 2050,” says Kammerer, who is based in Germany. “We believe this is an achievable target if we convert fossil fuel energy generation to renewable energy as much as possible. However, the sun isn’t always shining and the wind isn’t always blowing for renewable energy to meet the demand. That is why energy storage from renewable sources is a critical factor.  Using hydrogen to store the renewable energy when it is available can solve this dilemma.” 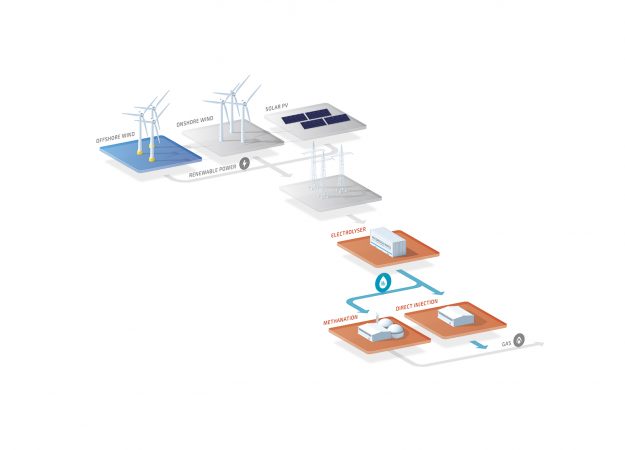 Renewable energy is converted into hydrogen for storage and use within the natural gas infrastructure through direct injection or conversion of hydrogen into synthetic methane.

The company has developed several breakthrough technologies to accomplish this goal.

One of Hydrogenics’ key technology offerings is its hydrogen generator or electrolyzer technology, which uses electricity to split water into hydrogen and oxygen. There are several types of electrolyzers but the most common ones for industrial use are alkaline and polymer electrolyte membrane (PEM), both of which are manufactured by Hydrogenics.

Hydrogenics’ PEM electrolyzer was developed during a 10-year research and development program; using this method, hydrogen is formed when a voltage is applied between the two electrodes in the electrolyzer. Water reacts at the anode or positive electrode, forming oxygen, while hydrogen ions move to the cathode or negative electrode across a polymer electrolyte membrane positioned in between the electrodes. Hydrogen ions combine with electrons to form hydrogen gas which can then be collected.

Hydrogenics has developed and installed more than 500 electrolyzers globally, including the first-to-market scalable PEM electrolysis electrolyzer. This past February, the company was awarded a contract by Air Liquide Canada Inc. to design, build and install a 20 MW PEM electrolyzer system, considered the world’s largest, at Bécancour, Qué. Hydrogenics says the plant will produce about 3,000 tons of hydrogen annually within the smallest carbon footprint and highest power density in the industry.

One of Hydrogenics’ fastest growing technology offering is its Power-to-Gas or energy storage solution, which converts excess grid electricity into hydrogen which can then be injected into an existing natural gas infrastructure or stored for use in other applications including fueling. The grid operator is able to do this by switching on the Power-to-Gas unit, which uses an electrolyzer to produce the hydrogen. 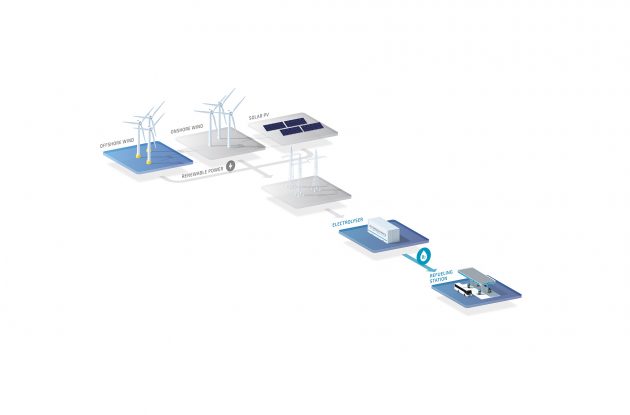 The natural gas infrastructure essentially serves as energy storage to be used at an advantageous time to re-convert the hydrogen into electricity either through a hydrogen powered turbine or in fuel cells. The turbines generally use a blend of hydrogen and natural gas.

As Kammerer points out, the Power-to-Gas segment has been exponentially growing and international interest is at an all-time high, proving itself to be a viable way for power grid operators to maximize their renewable energy potential and curb emissions.

When electrolyzer units are powered by renewable energy they produce 100 per cent emission-free energy that is not dependent on the weather at time of use.

The hydrogen produced from electrolyzers can also be used in fuel cells to generate electricity. Hydrogenics’ fuel cell division is another major component of its business. In a fuel cell, pressurized hydrogen gas is forced through an electrolyte, basically in the form of a thin, permeable sheet, which causes the hydrogen to split into ions and electrons. The electrons are conducted through an anode into an external circuit creating a flow of electricity which can be used to power various equipment.

On the cathode side of the fuel cell, oxygen gas is forced through the membrane, splitting into oxygen atoms, whose negative charge attracts the ions to combine and become the byproduct of water. Fuel cells can be hooked together into stacks for increased power and lend themselves to a wide variety of uses including transportation such cars, buses, trucks, trains, forklifts, etc., or as backup power if an electric grid shuts down.

As one of the few companies in the industry with expertise and technology on both the generation and use of hydrogen, the people at Hydrogenics have a strong grasp on the numerous ways in which hydrogen can be utilized to capture and supply power.

“For instance,” says Kammerer, a mechanical engineer from Waterloo, Ont., who eventually joined Hydrogenics in 2001, “by 2008, we observed that Power-to-Gas seemed to be the most noticeable emerging process. But now, those processes have broadened into so many variations that the term has been revised to ‘Power-to-X’.”

Power-to-X refers to the wide array of potential ways of converting renewable energy which includes Power-to-Gas, but also power-to-liquid (liquid methanol), power to ammonia, all-electrochemical synthesis, and others.

“When we look at the business case and emission reduction targets, we believe hydrogen can have the biggest impact in the transportation industry as a fuel source,” continues Kammerer. “Transportation is among the highest contributors to GHG emissions and pollution worldwide. Renewable hydrogen generation, coupled with fuel cell integration into that sector, offers an extremely compelling case to help achieve local and international emission reduction targets.”

Hydrogenics says the hydrogen fuel cell is the answer to scaling down emissions from vehicles and the company is now considered a major supplier of fuel cells for medium and heavy duty trucks and buses, as well as commercial passenger trains.

Hydrogenics supplied the core power for the French train manufacturer, Alstom’s “Coradia iLkint,” the world’s first passenger hydrogen fuel cell trains which began passenger operation in September, 2018. Their fuel cells are powering buses and trucks in North America to China, and the applications don’t stop there.

In December, 2018, Hydrogenics announced it had been selected to design and supply fuel cell power modules for a new lightweight vertical take-off and lift (VTOL) aircraft to be used for daily commuting and other applications, revolutionizing the way people travel between cities and around the country. And, indeed the uses continue even higher than the stratosphere since hydrogen fuel cells have been employed for decades in the space industry, including the Apollo moon missions. 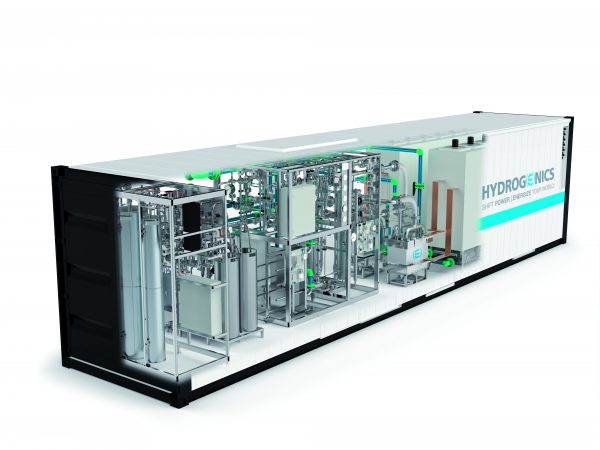 While it seems logical that fuel cells will become widespread for industrial and commercial use, Hydrogenics business development manager, Kammerer, predicts that the cruise ship industry will be one of the surprise beneficiaries of the technology and that it is already in development.

“I think you’ll be seeing ships deployed first in Norway for two reasons: to prevent pollution in the Scandinavian fjords and because fuelling with hydrogen is one-quarter the price of diesel fuel in Norway. It could also apply to river cruise ships and to major ports such as Los Angeles where pollution is a major problem in the shipping industry.

“The size of the vessel would not compromise anything in the way of performance and the hydrogen powered vessel would retain all the positive aspects of combustion.”