Farmers rely heavily on fertilizers to help feed the world’s over seven billion people. However, the only commercially available method to produce ammonia — a key ingredient in fertilizers — is not environmentally friendly.

The standard Haber-Bosch procedure for converting nitrogen gas (N2) to ammonia is energy intensive. This process accounts for about one-to-two per cent of global energy consumption as well as one per cent of global greenhouse gas emissions.

A research team involving scientists from Calgary, Toronto, Houston and Tennessee recently developed a new, green process for converting the nitrates (NO3) in industrial wastewater into ammonia.

Dr. Haotian Wang, an assistant professor at Rice University, and colleagues successfully converted nitrate to ammonia by adding electricity to a single atom catalyst. Honing in on a single atomic site was key to ensuring the desired reaction.

“If we have multiple active sites, we could end up with nitrogen gas instead,” said Wang. Single atom catalysts are created by reducing or shrinking a nanoparticle down to a single atom. Nanoparticles are made up of hundreds or thousands of individual atoms.

After testing a variety of single atom catalysts, the team found that iron was the most effective at converting nitrate into ammonia and recently published their findings. Wang said the SXRMB beamline at the Canadian Light Source (CLS) at the University of Saskatchewan was a critical tool in their work. “It enabled us to confirm that the catalyst we used was in fact a single atom catalyst and not a cluster of atoms or a nanoparticle.” 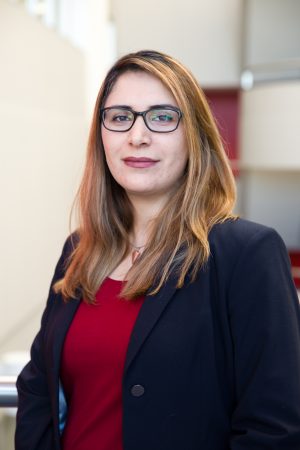 Dr. Samira Siahrostami, assistant professor of physical and theoretical chemistry in the Faculty of Science’s Department of Chemistry, has developed a portable device that produces hydrogen peroxide to purify water providing people in remote and rural locations, such as in developing countries, with clean and safe water.

Team member Dr. Samira Siahrostami and her colleagues at the University of Calgary, used computational chemistry to study the atomic structure of the catalyst, to better understand why single atoms of iron selectively produce ammonia but do not generate other products such as nitrogen.

While these are still early days for this type of research, Wang said the team’s initial results are very promising.

“What we found shows that this is possible,” says Wang. “We can use something that is a headache, the wastewater that people want to get rid of, to produce a valuable chemical with the input of renewable electricity. And we can do that without generating more carbon dioxide emissions.” Traditional thermal catalysis uses fossil fuels and the energy conversion is considerably less efficient.

Next steps include figuring out how to boost the catalyst’s efficiency and stability — so it can be scaled up for use in real-world applications — and doing more experiments using industrial wastewater, which has a more complex chemistry than the samples the team used.

Co-author Dr. Samira Siahrostami with the University of Calgary said their team will use what they have learned to finet-une the process and generate a purer, more concentrated form of ammonia from wastewater. “Having a more efficient catalyst material would help to boost the reaction even further.”